We've compiled data over the last year on how an Extensive Vegetated Roof absorbed and released solar energy (heat) over a twenty four hour cycle.

The roof under study is not insulated.  It has a tongue and groove pine deck with asphalt roll paper and asphalt shingles.  The interior was non-temperature (no heat or HVAC) controlled during the study periods.

The temperature measuring points were the exposed roof tongue and groove decking surfaces and consisted of multiple point averages.  Readings were taken with an EXTECH IR AN200 Unit.

The following illustrations depict a trend we've seen over and over. 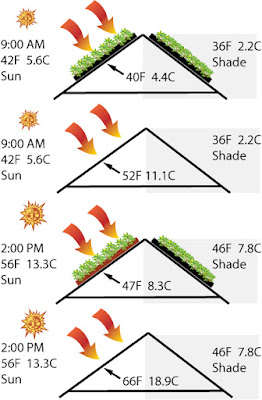 The data shown here is representative of spring, summer, autumn and winter with summer and winter having the more pronounced curves. 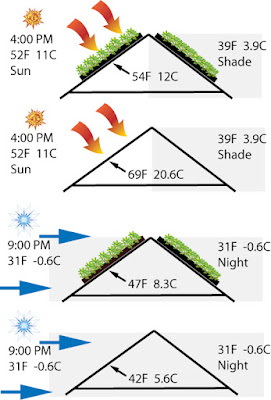 Importantly, we believe extensive green roofs, such as the one we are studying in this case, moderate temperature swings.

The data also points to the fact that green roofs serve as a heat sink, slowly absorbing solar heat during the daylight hours then slowly releasing the heat during the evening dark periods.

During the winter, green roofs may help by moderating cold temperatures at night by releasing heat back into the structure.  However if insulation separated the green roof from the structure then little or no heat would be recaptured unless a heat capture coil or other mechanism existed. 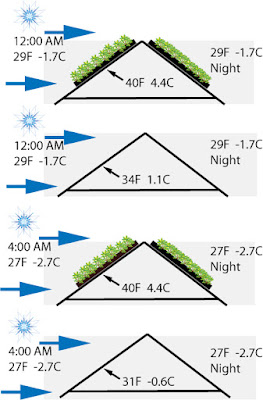 Again, if the roofs are insulated from the green roofs then there is no real benefit from a linear trendline perspective of sink and release.

We believe maybe this data points to the need for a method of harvesting the solar heat captured in the green roof during the day.  Potential capture processes could include water or silicon filled coils or tubes interwoven into the vegetated roof or other similar mechanical systems.

Harvesting the absorbed heat would allow for a more managed use of the solar heat resource. 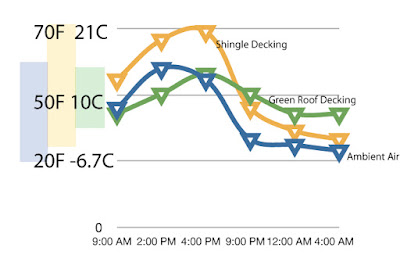 We do believe that the notion of green roofs working to cool buildings should be more appropriately described as a moderating effect of absorption and slow release of solar heat.

Check out the range bars on the temperature curve chart to the left.

Data points to the fact that green roofs absorb heat and quite a bit of it.


We always welcome your comments - feel free to email us anytime here.

Green roofs offer the potential to collect and harvest solar energy.  They may not be the cooling system we sometimes represent them to be.