Judy’s Maxim to Remember:  Best thing about the rabbits is their poo, because you can use the rich manure right on your garden without waiting.
Kevin’s Maxim to Remember:  Our rabbits were intent on eating and mating, not necessarily in that order and irrespective of whether the other rabbit was a male or a female. 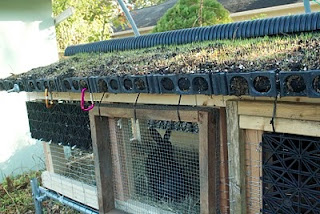 Rabbits can be a wonderful addition to the Urban Farm.  The hoppers are truly one of the easiest critters to provide care for.  Rabbit poo can be likened to steroids for plants, giving them the required nutrients for a rich and deeply vibrant color, encouraging the plants to grow fruits and vegetables  of monumental size.  Rabbit pellets and composted chicken poop combined are the only fertilizers your Urban Agriculture venture will ever really need.
And rabbits don’t take up much space.  Compared to the farm birds, rabbits can survive in a much smaller cage.  Therein lies a serious dilemma we came to struggle with.  Though many raise rabbits to feed their pythons (or sell to pet stores for python food) we raised rabbits first for their poo and second as a source of high quality meat.
Interestingly, we were very successful  with the use of poo, yet we quickly came to realize we could never kill our bunnies for a meal.

We fed our rabbits pelletized feed made for bunnies, packaged in fifty pound bags and bought from Standard Feed.  Of course the vitamin filled feed was supplemented with the better stuff, fresh greens from the garden and the occasional carrot from the kitchen.

Rabbits must have their water checked several times a day.  With heavy fur coats, they desperately need hydration during Florida’s long hot summers.  Be sure to give the water dispenser a good daily spray down, keeping it clean and free of algae or gunky growth.
As mammals, rabbits are different than the Urban Farm birds.  Looking you in the eye, sniffing and then cuddling up against your neck, a rabbit is more like a pet dog or cat than a hen or turkey.


Culturally, most of us are used to eating chicken or turkey on a daily deli basis.  Though my green roof friend in France loves rabbit on a stick with mustard, we here in the U.S. have not developed that tradition to any extent.  And so for us the killing and dressing of a half year old rabbit for a five minute meal did not present itself as appetizing.

Additionally, here in Florida where heat and humidity abound, our rabbits appeared to dread the summertime extremes even though we built their cages high above the ground with green roof shade and all the amenities we could think to include in a rabbit cage.
Not wanting to subject our rabbits to tiny, confined spaces, we tripled and quadrupled our bunny pen sizes.  Cruelty though still has a way of occupying even the largest of rabbit cages.  Rabbits were meant to be born into the wild.  Even the most spacious of outdoor cages creates a prison for the critters.  Our rabbits would stare at the veggie filled raised beds through their coop’s chicken wire sides and wonder what freedom would taste like.

Living cramped up in a four foot by four foot cage must be hard.  However many rabbit pens I’ve seen at the feed stores are much tinier.  I recommend at a minimum, rabbits be provided with twenty square feet be critter to allow for exercise room.

Bunnies enjoy running and hopping.  I suppose it is hard to do so in tiny cages and reminds me of being stuck in a way to tiny car for a very long trip.

Yes, rabbits can be very easy to take care of because they are not as vocal as the other farm critters.  The easiness is more of an out of sight, out of mind paradigm.

Before we gave Jack, our final rabbit away,  I let him out of the cage to run for a couple of days in the backyard.  Jack was our oldest rabbit too, solid black with a touch of oncoming gray. Of course he ran straight for the collards and arugula.  Jack had been staring at our practically unlimited array of leafy greens for the better part of a year.  He feasted like there was no tomorrow.

Jack was fine with running through our Urban Farm for the first day or two.  He’d leap, bounding across the rear three quarters of an acre as though he was a young bunny again.  Though he’d not allow us to come near him, he’d sleep up next to our house.  I suppose he felt some sense of security being near us at night.

But when my neighbor began to tell me he’d seen Jack in his garden I knew something had to be done.  Armed with a fishing net, the next morning I crept out and hid behind my neighbor’s tall tomato bushes and waited.  Before I knew it Jack had hopped through a hole in our fence and was headed straight for the neighbor’s turnip greens.

Though he had more organically grown greens than he could ever eat in our permaculture kingdom, Jack wanted what he could not have.

The fishing net swooshed through the air as Jack neared and before he knew it Jack was back in his cage, having experienced a brief but very happy few days of real life.

A note of caution here.  Always hold both rear legs of a rabbit very tightly when carrying as they pack a powerfully sharp punch, especially when the bunny knows they are headed back to the cage.

Though rabbits are some of the easiest of the Urban Farm critters to care for, I wouldn’t recommend starting off with bunnies.  Yes their poo is the perfect fertilizer.  Yes they are quiet and relative docile (Monty Python unfortunately gave them a bad name).  Yet subjecting the little mammals to a life in a cage seems more like cruel and unusual punishment.  Even if life behind the wire protected them from our neighborhood red tailed hawk.
Posted by Cosmic Gallbladder Healed at 4:39 AM
Email ThisBlogThis!Share to TwitterShare to FacebookShare to Pinterest
Labels: florida urban farm, florida urban permaculture, rabbits, urban farm, urban permaculture

It's too bad I didn't see this when you still had rabbits. We're a non-profit that could have advised you on ways to keep your rabbits, safe, healthy and happy in a natural but contained setting! Check out our facebook page, facebook.com/rabbitats, or our website, www.rabbitats.org.