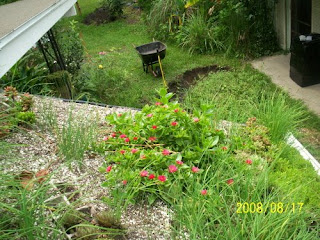 The three H's - Hurricanes, Heat and Humidity! Designing for the three 'H's can be tough but that is what the designer needs to do here in Florida!

A note of interest this morning is that several sedum species we've had on our trial panels appeared to have died last November/December. They apparently had just gone dormant because they are now growing with leaps and bounds.

It will be interesting to see just how root establishment will affect the hot-cold-wet-rainy period later this year.

On another note: Eric Flagg was out yesterday, filming his new video for the St. Johns Riverkeeper - and as he was filming one of the green roof sections, a monarch butterfly, Florida green anole and a bee gathered on the flowering iceplant clumps! Talk about a perfect example of creating habitat in the Urban Core!