Sedums on a Green Roof or Living Walls? Should I use Sedums in Florida

Today I am going to take a leap of faith here, stretch out my neck and say "Yes - Plant Sedums and Succulents on your Florida Green Roof!"  However there are several important qualifiers to this statement.

First of all - let me show you what will most likely happen once you plant a succulent or sedum on most of the vegetated roofs I've seen here in Florida. 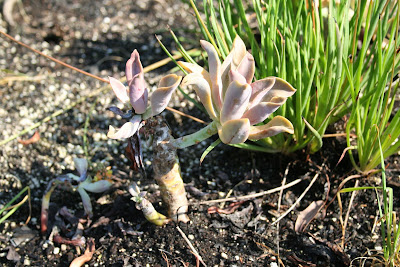 Now, one month later and the following photo is a green roof succulent seriously infected and dying from Sclerotium rolfsii.  June 2010, Florida. 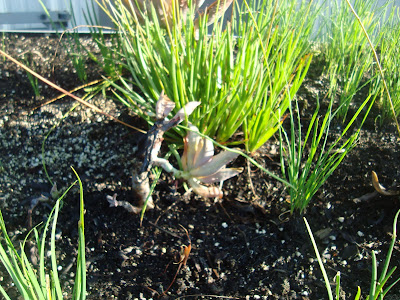 Note how the small branch has fallen over.

And you must be selective about the soil mixtures you use!  Regular nursery soil is at risk to have Southern Blight, or Sclerotium rolfsii spores in the soil, as the fungus is very common.  I find the spelling - ScleROTium appropriate.

Though not commonly transmitted by falling leaves from surrounding trees, if there is any Sclerotium rolfsii - even trace numbers of spores in the green roof soil, then the fallen leaves will provide a food source for the fungus and soon you will have a full blown infestation.

Succulents and sedums, along with many landscape plants and vegetables are susceptible to Sclerotium rolfsii infections.  The presence of the fungus is usually a death sentence for sedums.

When you witness massive sedum dieback across the southeastern US and especially in Florida, the reason for the dieback is usually an active Sclerotium rolfsii problem.

Because most green roofs use typical nursery soil, or soil imported on nursery plants, the fungus has become a common green roof issue.   Many people do not recognize the Sclerotium rolfsii and just assume sedums and some succulents cannot survive the torrid Florida humidity.

So what should you do about Sclerotium rolfsii?  How do you keep it off your vegetated roof?

Numero uno rule - don't use common nursery plants - most all have the fungus spores laying dormant or active in the potted soil.

Finally use those companion plants who produce trace sulfur compounds - there are many.  Sulfur lowers the pH and helps keep pest insects and spore transmitters, at bay.

We are about to release an all natural Southern Blight fighting, Trichoderma attracting green roof soil amendment.  Check back frequently for details or email me.

So plant and enjoy your green roof Sedums - but follow the guidelines!  Hopefully you can keep the southern blight at bay.